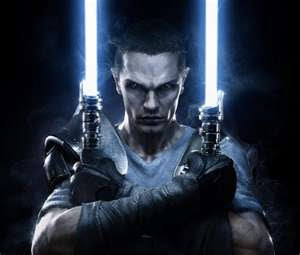 Ok....So I am slow.... almost short bus slow... almost. I recently picked up “Star Wars: Force Unleashed 2”, not the newest game out there but it was cheap on the used rack and well... as Kyle says “It Had Star Wars on it” so I picked it up.

Now over the last few days I have plowed into it, handicapped as I am by this strange button laden, two stick having uber controller that the kids use now a days and I am loving the story. I absolutely love the Character of Starkiller and some of the stuff you can do is amazing and for a Fanboy... down right giggle inducing.

The game does have its week moments... This General Kota the Jedi guy...ok, was he absent allot from Jedi School?? Cuz, Starkiller is a clone and he’s like...hacking his way through the galaxy and ol Kota keeps getting pinned down with a million rebels with him.

The other thing that burns my buns is the shear frequency of the “Super Mario” Moments, those hoppy jumpy times that are designed specifically to through the aged into fits. There is one time, when you return to Kamino that I actually said “If there is a giant ape at the top of this fiasco I’m killing lucas”.

But all and all The game really has got me and sparked the embers of the fanboy within. If you are a Star Wars fan give it a look.