The End of the Week….

Well here it is, Friday and it looks like Saturday is going to be very busy. Soccer Pictures, Soccer, Birthday party, Im sure my head will explode trying to keep it all straight. I can’t contemplate what it is going to be like when two boys are doing stuff.

Three friends stopped over Wednesday to pick up and borrow some re-enacting gear. It was great to see them. They are doing Marietta manor this weekend, ( a great place ) and kept asking me to go. My WWII unit will be there as well and ol Jim Marcum was telling me I should go, but I can’t…just to busy.

Went to the Doctors again yesterday and he gave me the green light and said I should eventually be able to bend it all the way ( can’t make a fist….so I have had to use Judo Chops when Combating Evil Ninjas and Sinister Frogmen ).
Posted by Clockmaker at 5:13 AM No comments:

Well, we may actually be returning to some level of Normal. We had Soccer on Saturday, Kevin and I went in to Bilbo’s Birthday party ( BTW Kevin won a door prize :o) and I went out and saw a movie with Kyle.

We went and saw Resident Evil: Extinction. First off, if your looking for frick’n hamlet you obviously need your head examined for going to this film…However…If your looking for a fun Zombie film, then this one fits the bill. At one point, when Milla discovered all the Milla clones, I couldn’t help but think… “my god this could be the perfect movie…Milla kissing Milla” but Alias it didn’t happen…That’s what sequels are for. See this film and have a fun time.

On Sunday I drove around and took a couple of shots of my Truck, Owen was over Mom-Mom S’s and Kevin and Kathy were at the Children’s mass so I treated my self tp breakfast and a drive. I thought my CD player and Stereo were messed up ( and they were) when I went to put my first CD in, It reset all my stations and I kept getting “Mech Error” but it corrected itself ( still had to reset my stations) latter when I got home…it ejected the disk and pulled it back in and everything seems to be OK now.

Also…Found out that the “Flames of War” main warehouse is just around the corner from me literlly…wow! “FOW” is a WWII rules set for 15mm Miniatures.
Posted by Clockmaker at 5:48 AM No comments:

As they used to say on “the Price is Right”. Last night I bought a 2007 Honda Ridgeline. It has everything I want….except the gas mileage, Oh well. At least I now have a car that isn’t a Rental ( Yeach!!!). Going to try to set my radio stations and the likes during lunch. Its sort of like having a robotic version of my wife, as the doors automatically Lock when it starts to move.
Posted by Clockmaker at 6:24 AM No comments:

Heck no, I have been really busy trying to buy a new Vehicle since they Totaled my Jeep. The sooner the better, I am driving a car for the first time in forever. I am looking at Honda products, truth be known I would have preferred a VW but the damn Tourag is just to damn expensive. I am leaning towards the Honda Ridgline, that’s what I want, however I feel guilty about the gas mileage and may test ride the new CRV. I sat in one and it seemed pretty tight for big guys but I’ll give it a go.
Posted by Clockmaker at 7:14 AM No comments: 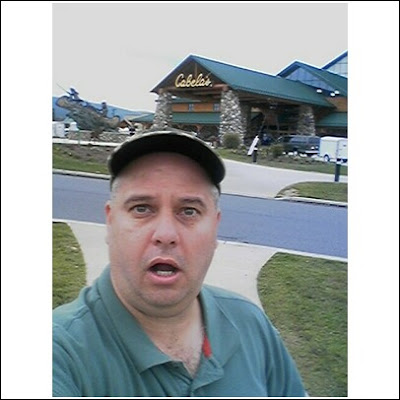 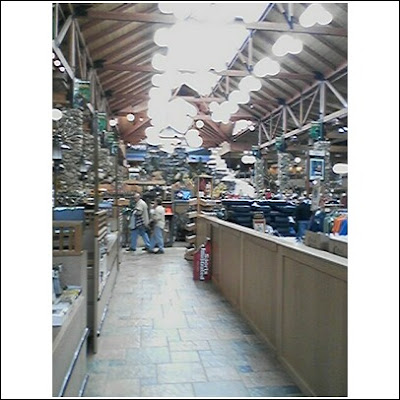 You may know it as Cabella’s…it rest on a Hilltop outside and draws the tired traveler like flys to molasses. It is huge, inside are Mountains…and bears….and mountain bears and guns…and tents and everything.

Posted by Clockmaker at 7:11 PM No comments:

If there is one thing I understand in the world and truly sympathize with, that’s a Hospitals ER. You could say I’ve been raised in them…because I have…My mother has been a Emergency room nurse all her life so I do understand.

I got into the ER around 5:30, I felt bad about having to have guys push me in on a stretcher, but hey…they said it makes them look good. They took down some basic info then they sent me on the Fast Track room. I waited in the hallway outside the fast track room a couple of hours, then I was allowed to enter.
The first question was “ Have you been X-rayed?” my response was “ Why no I haven’t” then that fellow disappeared. About a hour latter a girl popped in and ask “ Have you been to X-ray??” I replied “Why no I haven’t” and she vanished. 15 minutes latter a different woman appeared….attempting to anticipate the question I asked “ Are you going to ask me if I have been to X-ray?”, the Woman’s face went blank as she answered “ No…I am going to take you to X-ray” So off we went.
X-ray was fun, I got to stand in a room full of super huge radiation machines and chat with the X-ray staff, who upon hearing what had happened to my finger, exclaimed “ Shut Up!!!” I thought that was hysterical. After my time there I was sent back to my little curtained room.
The very first fellow I had meet came back in….Announced a bunch of nothing conclusive and said he sew up my finger ( Keep in mind my left arm had been totally forgotten about). The suturing went alright and when complete he vanished….apparently nurses would handle the bandaging. I waited forever but then the two nurses came in. I became a complex puzzle for them as they tried to figure out what splint to use but finally I was splinted and ready to go.
At this point I was no longer concerned about my left arm and the objects that could be in it so I took the given chance to escape. After I filled out my paperwork….I wonder out into the night air….and freedom.
Posted by Clockmaker at 10:41 AM No comments:

My Trip to the ER 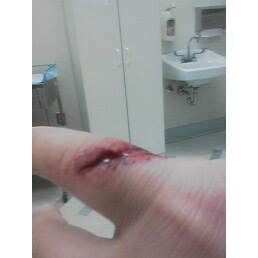 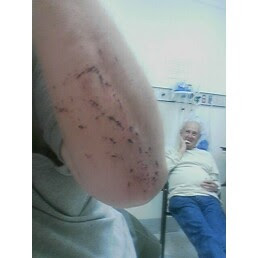 Well....It all started like this, I was on my way home, I usaly go through a park on my way to pick up my youngest son ( I like the chance to relax)...well the one park roads was closed so I turned down a road that I know rather well. I was going about 35 mph through a S turn when my cars rear went out, when I recovered I was heading into the left lane at a on coming car, I pulled hard Right and Flipped my Jeep right up on its side. I did manage ( to my great relief) to miss the other car. My driver side window shattered and that where I got the left arm cuts, I had put down my arm to stop my head from going down. My finger was injured getting out of the Jeep ( By far the funniest story...I'll have to tell in person).
Posted by Clockmaker at 7:05 AM No comments:

Ok Ok Ok, it a cartoon, its on Nick and its American made I know, I know… But trust me, its good stuff. My older son and I watch it, I think I liked it more at first, but now he likes it to. Good action, Great Story, Super animation with some humor, it’s a winner all around.

I think my son and I both think “ That Lemur is a Earth Bender” to be one of the funniest lines in the show…that and when Sakka was trying to name the group “ Boomerang….Its got Ang in it”. I think Toph has some of the greatest lines in the show. She is a Earth bender ( the World’s greatest…according to her) but she is blind. Once, when the group plunges underground to get beneath a giant drilling machine, in the darkness, Saka proclaims to the effect “ Its so dark I cant see anything” and Toph retorts sarcastically “ Oh no! how terrible”.
The show is going into its third season starting in a couple of weeks, I hope it stays as good as it has been.
Posted by Clockmaker at 6:15 AM No comments:

We headed out to Kevin’s first game of the season. He did great, as did the other kids. I was asked to coach, it was pretty humid and hot but it was fun. We watched the end of the Avatar season, and that Rocked. I dropped off some Miniatures to be painted and stopped off at Shorty to pick up some stuff for this weekend. Its as humid as it can be with us being submerged. We have a busy week, Kathy has a school meeting tonight, Soccer tomorrow and this that and the other thing. Well off we go, sound the bugle and let us advance on the week ahead….Tallyho
Posted by Clockmaker at 7:41 AM No comments:

Friday, named after Freyja, the goddess of beauty… now that’s appropriate because Friday is a beautiful thing. We have a soccer game planned for tomorrow but besides that I think we are clear. I am trying to get things together for Threads, Ordered my new Aug a1 in hopes of getting it by the game, I have my M-4 but my other rifles ( although good) don’t allow me a ease of operation and I need a "badguy" weapon.

Well that’s it I guess
Posted by Clockmaker at 5:15 AM No comments:

Yep, it’s the day before Friday, the one named after the god of Lightning, That means one more day until the weekend. Thread’s is next weekend so I had better get on the ball and make my Hotel reservation. FFG is releasing Ragnorak, a new alternate WWII ( In reality WWI never ended) game, I can’t wait to take a look. FFG is also got plans for a Dust Game, Dust is a alternate WWII world designed by Palo Parente. Oh well…back to work.
Posted by Clockmaker at 5:35 AM No comments:

Ok, last night was not the best night, My youngest decided that he and the baby gnomes would strike up a conversation at about 4:00 AM. It was crying, It was him just yammering away…with the Baby Gnomes. I go in and he is side ways in the crib, bumper laying across his body and wearing his blanket like a turban. He looks up at me with a smile like he is saying “ Woooo Pops!! I didn’t know the gnomes invited you!!! Welcome to the party!”

My Oldest had soccer last night, he did great, although I worry that he has my balance issues. Anyway…back to the grind.
Posted by Clockmaker at 5:15 AM No comments:

Well, I guess the obvious thing is that Tuesday is Monday this week…or it remains Tuesday but acts as a defacto Monday…sort of a sad little excuse for a Monday but on this and several other occasions it must sit in as Monday. Sort of like Chaney when Bush goes in to get a Colonoscopy.
Over the Weekend I help out my friend with his Larp, Doc Savage, which is cool because I love the Pulp Genre. I had a good time, there were some things that needed some work, but it didn’t inhibit my fun at all, and my fun is what matters ( Me, me, me, me).
It was a relaxing weekend with great weather, We went up to the park and I rode bikes with my son…Kathy and Owen came along as well. All in all in was a good weekend.
Posted by Clockmaker at 5:00 AM No comments: