Is there a heaven for old Cartoon Characters? 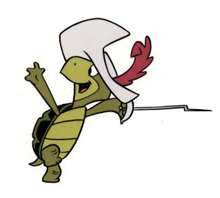 I was thinking (something I don’t do often) about the shows I watched when I was young, that endless line up of cartoons that entertained us on Saturday mornings and when we got home from school. We watched the same episodes over and over again yet we didnt seem to mind, they were like a part of our family.....but what ever became of them.

Yes certain Characters, The Bug’s Bunny’s and the like obtain a certain level of immortality. Bugs can even drag some of the lesser players from the Warner Bro’s lot along with him from generation to generation but what happened to Touche Turtle ( to quote “Giligan’s island”) “And the rest”.

“The Mighty hero’s” “Tobar the 8man” “The Wacky racers” “top cat” “wally gator” “hong kong fooey” “the Archies” not to mention the somewhat better knowns like “Bullwinkle” and “The Flintstones” that seem to hang on the edge of consciousness, not willing to drop off into cartoon oblivion.

I’m sure there is a channel out there somewhere that plays them endlessly... but the kids don’t watch, they play for 30 somethings (or older) wanting to recapture, if only for a moment, those Saturday mornings lying on the floor in front of a huge TV with GI Joe in one hand and a pack of razzles in the other.

They deserve a better fate then the dark called prisons of the forgotten, for all the laughs they gave us, the comfort they provide when we were sick, the smile when we were sad. I hope there is a Cartoon heaven.

Posted by Clockmaker at 12:08 PM No comments: