Mike and Tracey put out a call for some help and a whole crowd of hard workers answered. 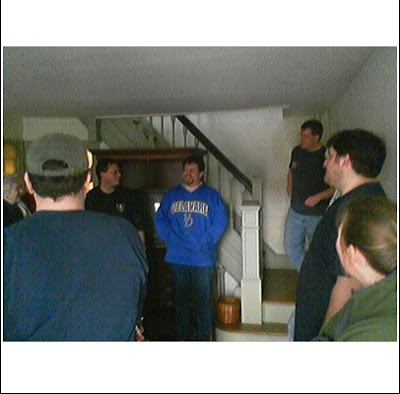 They were treated to a free lunch for their efforts 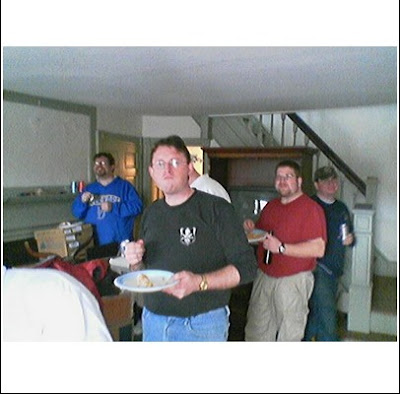 And as I said before, they house has a great view, over looking the green in Newcastle, right in the heart of the historic district. 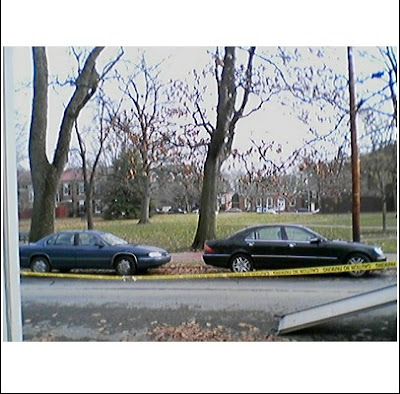 Posted by Clockmaker at 12:46 PM No comments:

The strange case of the Boxwinder Staircase...

During my friends move, he had decided that he wanted a boxspring on the 3rd floor, the issue is there is only a box winder staircase going up 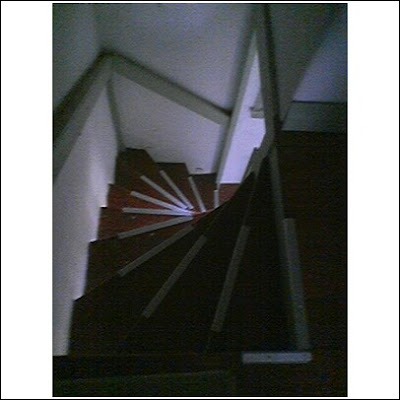 Try as we might, the boxspring wouldn't go ( 2nd picture) 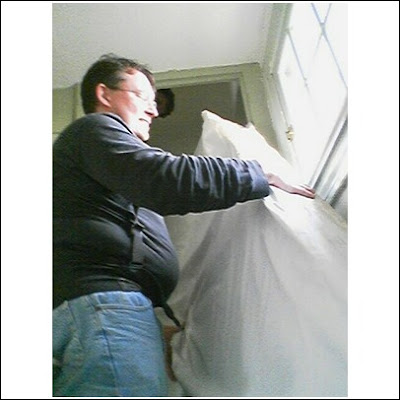 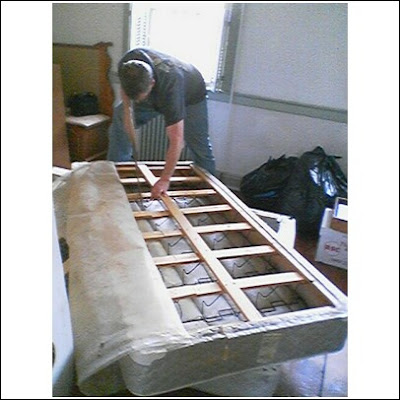 Posted by Clockmaker at 12:30 PM No comments:

A Day in Historic New Castle 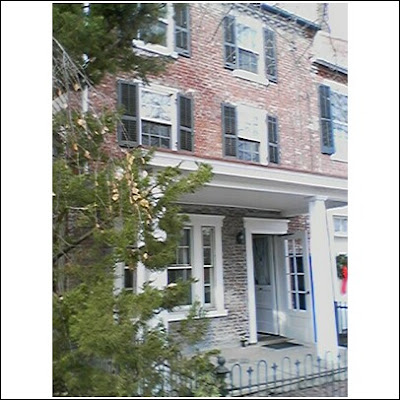 My friends moved into a great new home in New castle...
Posted by Clockmaker at 12:17 PM No comments:

“Presents as far as the eye can see!!” is how my 7 year old said it as he came running back up stairs to report on what awaited downstairs. He and his brother made out like bandits. We spent the morning at the house, just us, my wife and two children, and that was fun. I was a little peeved at the amount of toys that didn’t work, but hey….it was Christmas. Kevin really got into his new games for gameboy and Owen was just into it.
We went up to Uncle Dave’s for Christmas Lunch and I had a Great time!!! Cookies, Christmas sandwichs ( which are always better then normal sandwich’s cause they are made with….love” and Kathy had her Christmas soup. The kids got more gifts and we had a chance to joke around with friends.
We went up to Kathy’s parents for Christmas dinner….Which was Awesome!!! And the kids got even more gifts. Through it all the children were well behaved, Owen was fussy here and there but for the most part he was all crawling and smiles. Kevin was a good boy to, he played well with Camo’s kids and was in general well behaved and seemed to have a blast.
We all struggled back to the house around 8:30 – 9:00 and Owen went off to bed. Now on Christmas eve Owen had a rough night, he woke up every 45 minutes absolutely having a fit, I finally had to walk him around on my shoulder to get him back to sleep, he would not be rocked or lay flat ….it was the same Christmas night, and it wasn’t till 2:30 that he finally slept till morning.
Kevin relaxed a bit, we opened some of his new toys and I put together a Bioncle for him. He watched some tv then we went up to read some “Hobbit” as he drifted off ( Bilbo got caught by some trolls…Eh Ghad!!).
Im back to work in the morning but Kathy has off.
Posted by Clockmaker at 4:41 AM No comments:

I started a new blog this weekend to track all the different Living History impressions I do. I was sort of a blast to see some of the old pictures. I have a ton of me doing CW, that’s because Kathy took them, I never take photos and when I do they are always of other people. I was able to put out a call to some Friends who happen to have some shots with me in them. It was great to see the ECW picture with Kent, tom and I. Take a look at the site at….


http://clockworktm.blogspot.com/
Posted by Clockmaker at 4:59 AM No comments:

Well one of 2007 last few weekends has past, I attended a work Christmas party on Saturday night and on Sunday we lost power for a while. The Kids and Kathy went up to her parents as we had no heat or power. When the electric came back on it was on in off for about a hour till finally it was stable. I cleaned up the book shelf from Granny’s house and moved it to the basement to hold more Miniatures.
I got a few things to get done today so the fun just keeps going on and on. Hopefully Kevin will be good at school, today is report card day.
Posted by Clockmaker at 6:42 AM No comments:

Magic Armor:
Would take the form of…
Gorgets: imbued by Smiths, Alchemists and Mages and worn by all officers, Some may also have special properties. The Average Gorget grants 1 armor to the wearer.

Medicine Bags: Medicine bags can be imbued by a shaman to do many things, one of those is protection. The strength of the Spirit magic depends on many factors but it is safe to assume that a Medicine bag will grant at least 2 Armor. However the effect is not permanent and uslay dissipates over time

Rings and Bracelets: Always of Silver, are the way that Wichians and Wizerians grant protections. These Natural magic’s are permanent, however they are uselay not as encompassing as Spirit or Arcane protections, protecting only a portion of the body.

With the introduction of Regimental Magicians into the army by the Duke of Marlborough at the turn of the century, ways had to be found to counter the magical effects of these powerful wielders. It was the Alchemists of Frederick the great that first produced the “Null Bomb”, A small bag of ingredients then when burst, creates a momentary, localized interruption to magical forces. The effect last a brief time, but often gives enough time for a marksmen to end the Mages life. Wichian’s and Wizerians were soon able to duplicate this effects using natural herbs and these played a decisive roll in the French and Indian War.

Magic Weapons/ Magic Ammo
Smiths of Europe have long been able to craft magic weapons, Swords, Halberds and Spontons are often prize possession of the wealthy officers. The gunsmiths of Pennsylvania are renowned for their Rifles, each one a work of art and tailored to its owner, their art is rumored to surpass even that of the German Smiths. Alchemists make a good trade with Musket balls that fly truer or further or powder that increases the hitting ability of the ball.

Healing
Arcane users, Mages, Smiths and Alchemists can not use the Healing energies, this is the Realm of Holy, Spirit or Natural Magic’s. Devine magic is often considered the greatest of healing magic. Shamans have been known to heal some diseases that Devine wielders could not but is not a powerful as divine. Natural wielders are known for the ability to heal light injuries or illnesses but can only temporarily forestall the effects of major wounds and illness.
Posted by Clockmaker at 6:01 AM No comments:

Lat night we had a snow fall, maybe 3 to 4 inches, no big deal, the first of the year. I have loved snow all my life, I don’t know why, I used to hate it when we would have to go to school while the snow melted or I bore a grudge against salt and sand trucks for making the beautiful white landscape look like a grungy mess. I still remember going out into the snow at night time and staying out for ever, it never snowed to hard for us to be outside.
Once, when I was probably 15 or 16, I remember, at the height of a blizzard, me and my friends trudging up frozen Whiteclay creek at night all the way to Possum park shopping center. Our scarves froze like masks on our faces. It was great.
Snow at night I remember to, the sound it made on the tree branches, how invisible it was until it was caught by light. It seems crazy for young kids to be out in the snow like we were but truth is I never remember being cold.We use to build huge snow forts, Snow men and other frozen field works, only to have them melt in the days that follow I don’t know If I have that same love for snow now that Im a adult ( age wise at least) but I still do like to see it snow
Posted by Clockmaker at 11:22 AM No comments:

Well I was able to get up to Reenactor fest III in G-burg this weekend. I got up there early and cruised around the battlefield as it has been a while since I had been there. Things have changed up there, allot of tree clearing, its allot easier to get to the Bliss Farm now for Long Ave and Devils den is cleared. In my opinion, there is no better time to be at a historical site then at Dawn or shortly after, and Saturday was a brilliant fall morning. The Fest itself was a fun time, I helped Matt at his table, I did 1882 Blackwatch, he did Boer War. I saw allot of old faces and ended up chatting for awhile. It always amazes me the level of knowledge that some reenactors achieve in their area of expertise…I.E. there was this guy up there with a table set up, his impression is that of a Paruker ( A guy who styles wigs) and the amount of knowledge he had and the way he presented himself was amazing. There were a group of kids ( about 18-22 years old) doing Pirates…I have to say I was impressed by them as they seemed to have gone out of their way to dress the part, no store bought Ren-faire crap. We had a good dinner and spent some time talking about old times, then I cruised home.

I also went up to my Grandparents on Sunday to see if there was anything I wanted. It was sad in a way, as A boy I had loved that house, Allot of memories are there. The fire place, the floor where I had played with antique soldiers for hours on end, the bed were I had slept when we went over, That place holds a heck of allot of great memories. I am going to grab some stuff tonight, So I will go back up.
Posted by Clockmaker at 7:51 AM No comments: