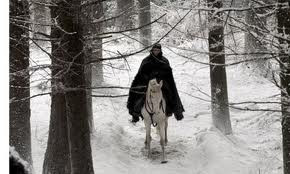 This Sunday HBO aired the first episode of “Game of Thrones” based on the Novels of George Martin (yes I refused to use his middle initials). I have never read the books but the idea of a Fantasy series on HBO really stocked the fires of my inner geek so I was looking forward to the series.

Last Month HBO began posting some video’s “Ondemand” explaining some of the houses and the world and such and I found my self looking more and more forward to the series. As a Uber nerd I am accustomed to being disappointed so I made sure that I was well armored against the chance of major Suckage.

As A non-reader of the books I didnt have a predetermined idea of what should or shouldn't be, I was the preverbal clean slate. So Sunday when the kids and wife had gone to bed, I sat and watched episode 1.... Two Times.

The series had me right from the first minutes, as the Knights Watch rode through the Icewall and were attacked by the White walkers ( or is it Wight). I loved the way the scene played out against the snow covered forest backdrop and the creatures even though they were only shown in glimpses were Terrifying.

As the episode progressed it introduced a world of great intrigue, the “Kings Hand” had just died ( I think the queen and her brother were responsible) so the king heads north to ask his friend Lord Stark to be the new Kings hand. As all of this takes place, in another land we learn of the Targaryen’s, who were apparently over thrown or something (they may have killed the kings first love.... cause he sure hinted he liked killing Targaryens) and were plotting their return to power.

One of my Favorite scenes happened late in the episode, when the Queen’s Dwarf Brother, Tyrion and Lord Stark’s bastard son, Jon Snow, have a brief conversation and Tyrion advises him to embrace the fact that he is a bastard and no one can ever use it to harm him. Jon Snow asks “What would a Dwarf know of being a bastard” and Tyrion answers “All dwarves are bastards in the eyes of their fathers”. I just thought that was a great scene showing a shrewd wisdom on Tyrion’s part and Jon Snow is one of my Favorite Charecters so far.

Ok....HE PUSHED THE KID OUT THE FRIGGIN WINDOW!!!???? holy crap!!! In a way you knew it was coming but part of you was still going “neh...he cant do that” and sure enough he does. The he is the Queens brother...and he and the queen were up in a tower “getting to know each other better” when one of the Stark children climbs the tower and discovers them. Well the Queens brother catches the boy and then nonchalantly pushes him out the window while saying “the things I do for love” wow...do I hate this guy.

As I have said, I loved so much about this first episode, I pray it continues to be as solid. I enjoyed it on various geek levels as well, I thought the costuming was fantastic, from the black of the Knight’s watch, to the Gilded armor of the people from King’s Point (Though who the hell was the guy in the black armor with the Grumpy Bear helmet?) I was impressed. I have to say that the fashions of House stark are my Favorite so far.

For those of you who have never read the books, Give it a go, you won’t be disappointed. 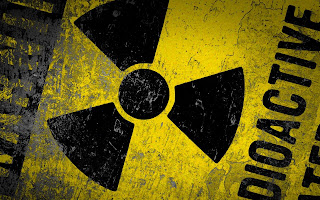 What would you carry into the frightening landscape of the Zombpocalypse... The question was asked while we were at the home of Lord and Lady Aravan and I wish we had more time to geek over it. I thought about it carefully and decided the following.

First to Level set... My ground rules were I could only choose from weapons I had.Second, many people who do this sort of exercise have never really had to carry A Weapon let alone Weapons and their corresponding ammunition for any real length of time so I decided to choose based on the fact that I would eventually find myself walking.

My Rifle.... for I would only carry one... would, by necessity by a AR15 (5.56). Why? you ask, simple every police department and national guard until throughout the nation either A. use a AR15/m4/m16 or a rifle that fires 5.56, so this gives you a source to scrounge parts and ammo. The AR is not my favorite rifle, not by a long shot but you got to go with the most common (IMHO).

The real question is, which AR do I take, I have a COLT SP1 with a A1 upper and full length barrel ( tricked out to Vietnam Specs) and I have a Bushmaster lower and a A1 “XM177” upper making it a carbine (16” barrel) with collapsing stock. one is compact and handy in tight spaces, the other gives me a bit more range in my opinion.

I think I would take the longer rifle, I am under the impression that the carbine is 5 times as loud ( just due to the muzzle being closer to your head) then the longer and I might need some range when Zombie comes to shove. I only have a few 30 round mags, but I have a whole mess of 20 round mags so I think I would be OK. So my colt SP1 (AR15) it would be.

Pistol...or in this case Pistols...like a moron I will have decided to carry 2 of them. The first would be my Berretta 92F, Its 9mm and has High capacity mags. 9mm will be common enough and the 92f or clones are pretty common as well. The second, will be my Colt 1911 45ACP... I love the .45 and couldn't bare to be without it... so I would be a total idiot and burden myself with two pistols.

So those are the weapons I would go into the harsh night of the Zombpocalpyse with. Facing the the hordes of the walking dead to the sharp report of 3 weapons used by the US military. 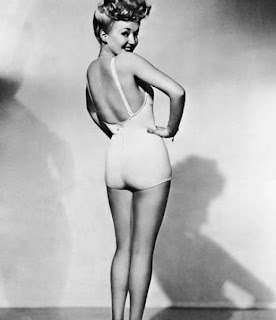 I am posting something right here...right now... so I can say I have posted something. I am getting ready to go to one of the little cog's soccer game so I can't put anything to voluminous but here it is. Stay tuned for more from the Clockwinder network.
In the mean time.... Miss Betty Grable.
Posted by Clockmaker at 6:11 AM 1 comment:

The fastest hunk of junk in the Galaxy....

Our next Clockwinder favorite was a bit of a tough one... What is my Favorite Spaceship, Merchant class. You may be saying “Merchant Class?! come on ! thats easy” but it really wasn’t.

Think of the choices you have, The Serenity, a Firefly class transport that gave its name to a movie and class name to a series. Serenity was practically a charecter in her own right, with her own problems and rising to the occasion when needed. She would have been a solid choice.

Then there is the “Red Dwarf” from the BBC series of the same name. A super huge cargo ship that seems to have a little bit of everything ( but not enough Kristen Kachanski... sorry Dave). Where as the “Red Dwarf” may not have been a Special Effects wonder, you bought into it and its crew.

But my choice as favorite is probably no surprise at all, The Millennium Falcon, the beat up old YT-1300 freighter of the famous Han Solo. I first glimpsed her sitting in hanger bay 94 when our heroes approached here (and before the addition of the Jabba the Hutt scene in the Spec Edtn) but never had luke’s adverse reaction to her. It was love at first sight.

Her dents and scratches do not detract from her beauty, they enhance it and give her character. The interior... dirty impact pads and burned out panels... add to her mystic like qualities. She is fast...”how fast?”... lets explain it this way, Han jumps into hyperspace, comes into the crew area, has some playful force related banter and then they are entering the Alderon system...ZOOOOOOOM!! dat is fast.

And she has bite, two quad mounts and apparently some hidden blasters here and there just to keep people guessing and in ROTJ we see she is armed with missiles. Her way of saying “You and who’s army?”

In ESB we get to see more of her battered interior and the fact that she is feeling the years... but when it counts, this ship dodges and weaves, zooms and blast better then any out there. I salute you Millennium falcon... as the Clockwinder’s favorite Merchant class vessel. 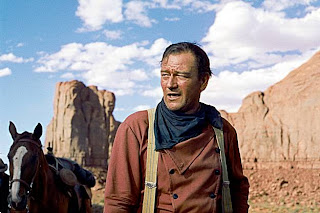 Sorry Clockwatchers, truth is I actually have been playing a new computer game and that has taken out of my writing time. Poor bloody excuse I know but I shall endeavor to get back on the Clockwork bandwagon.

For those of you that have miss me....rest assured that I have missed you as well :::whimper:::.

It is starting to be springish and I find myself in need of a lawn mower. The old craftsmen fell apart and no parts were available for it so it looks like I need to go out and buy one.

The Clocklings are both playing sports now... Track and Soccer ... so that will make things a little more hectic but it will also give me some time to listen to some books while At practice... the ying and yang thing.

Why The John Wayne Photo? Why Not? its him in "the Searchers" and if you havent seen it, you should.